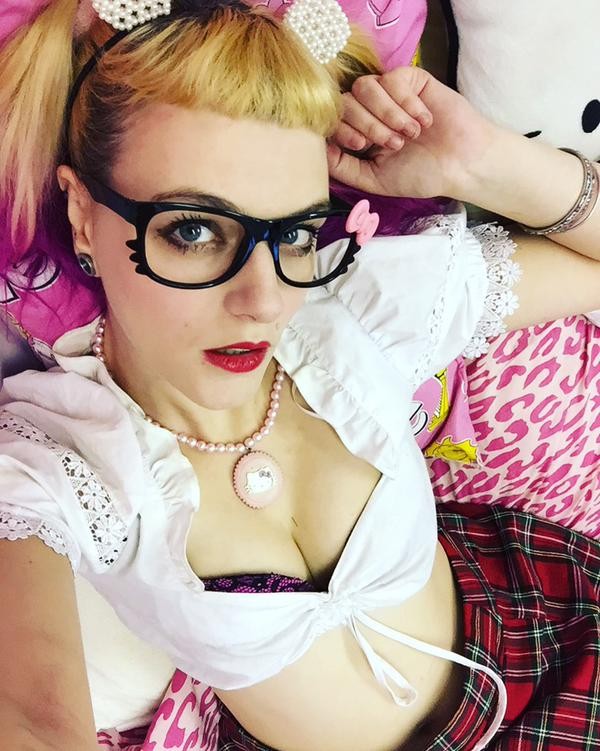 Had a session with Princess Almighty? Send a Testimonial
Twitter

Sweet and innocent?! HA! Looks can be *VERY* fucking deceiving..... "Princess Almighty AKA Kitty-Mae may be a cute looking schoolgirl Domina, but who has such utterly sadistic tendencies, she will fuck you up, break you in half and leave you in tears... but she looks so innocent, that no-one will ever believe you!!"- DM

She may look like sweet little Kawaii doll but please don't let this young Goddess fool you. She truly encapsulates the phrase 'Hell hath no fury like a schoolgirl on a rampage'!

Decadent, intelligent, imaginative, excitable and intense, at 5'9 in stocking feet, she is instantly recognisable on the scene with her Japanese inspired lolita clothing, authentic English and Japanese school uniforms, wigs, pigtails, Hello Kitty glasses and tons of pink, glittery and Hello Kitty Decora. Her style, which is all her own, takes inspiration from everything and everyone she has ever met and it allows her to fuck with people's perceptions of what a Dominatrix should be. She has been called "The Hello Kitty Domme' and gets great satisfaction from the reaction's of people who mistake her power. She also enjoys role play and loves to be given to opportunity to dress up as more 'traditional' Domina, secretary, or anything else that takes her fancy.

"Since I was a kid, I knew I loved to be in control of a boy. To have them under my feet and do my bidding was enormously satisfying. I loved looking like butter wouldn't melt in my mouth, but then being utterly machiavellian and dominating, leaving the boy in such a tiz!"

She has also very recently branched out into fetish modeling, and has shot for Kink Canary ( freaksinside.com and clinicaltorments.com), Catronia Stewart Latex and will be shooting for The English Mansion later on in 2015 as well as also branching out into doing performaces, having debuted 'Personal Panda' at Club Pedestal in London in June 2015.

So if you have ever had sick fetishistic notions about being controlled, owned, debased and humiliated by a little girl, a sweet innocent (albeit tall) schoolgirl lolita, who is genuinely giddy over pink and Hello Kitty you have found her. :D

This is not and never ever ever will be a sexual service. Kitty-Mae does not give a fuck about your dick and 'what you want'. All of her sessions are performed fully dressed. This isnt a chance to fuck her or for her to beat you up and toss you off... Its not gonna happen. So please don't humiliate yourself by asking because she will keep your money, blacklist you and inform other Dominas that she works with. It's honestly not worth

Activities that I enjoy